Ever since I discovered Chez Les Rois at frenchweddingvenue.com  I have been looking forward to playing there. On Sunday my wish finally came true. And it surpassed all expectation…

When I first contacted Gail, the proprietor, she was so kind and encouraging that I felt sure I would be playing there one day. Quite apart from Gail being lovely, the venue looked so typically ‘Charentaise’ – surrounded by vineyards and sunflowers – that it instantly felt friendly and welcoming, and I knew it would be a hit with destination wedding couples from the UK.

Without wanting to sound too much like an ‘Agent Immobilier’ (the French term for Estate Agent, or Realtor in the US), Chez Les Rois is a collection of attractive limestone buildings where guests can stay, set around a central courtyard, with an opening leading to the pool and bar area, a covered terrace for dining, and a couple of steps leading up to a hedge-enclosed lawn, where the team had erected a pretty metal and voile gazebo for the ceremony. Simply put, it was stunning. Truly, literally, a ‘Home of Kings.’

When I arrived – on time and hassle free thanks to Gail’s clear directions – I went in search of the lady of the house. Instead I found the male contingent of the Wedding Party, and Ken, the slightly nervous Groom, still dressed in shorts and T-shirt, kindly conducted me to the kitchens to find the elusive hostess. She greeted me as an old friend, with the customary two kisses, and despite being obviously busy with the preparations, took me on a tour of the grounds.

Everything had been thought of – there was a tree for me to sit under (so much cooler than a parasol) a pretty bench to sit on, and even a working electricity point attached to the tree (you have no idea how often this can be a problem at outdoor venues), so immediately I was at ease…

As I was setting up and sound checking, the Celebrant, Christine of CelebrantsInFrance arrived with her husband, who was acting as porter for the day. What a lovely couple! Christine confessed that she adored live music in her ceremonies, and of course she is right, it completely transforms the occasion, especially when the couple are able to request the songs they love…

Sarah and Ken had made a special request of me: Self-confessed film-music buffs, Sarah wanted to walk down the aisle – a spotless white carpet – to ‘Marry Me’ by Train, the song which Ken had proposed to her with, and exit to ‘River Flows In You’ from the ‘Twilight’ Saga soundtrack. I had arranged these for ‘cello and piano, and created a playlist for their cocktail hour based on their love of film and contemporary music.

When the appointed time arrived, and Sarah appeared in a gorgeous fitted lace gown, I spotted photographer David Page discreetly and skilfully capturing the moment, as he always does. He quickly leaped into position and I knew that the ‘tree shot’ would be the one I would use on my web page!

The ceremony itself was perfect – Christine opened with an address to the Father of the Bride, which was incredibly moving, the Couple had written their own vows, including references to their special song ‘You Are My Sunshine’ (I had to stop myself from breaking into an impromptu rendition of this number…) and despite the nerves beforehand, Christine led the proceedings with aplomb, putting everyone at their ease, and it was truly beautiful. 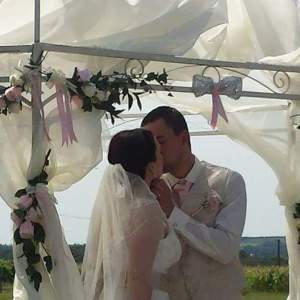 As a final special touch, Christine has asked Sarah and Ken to write secret love letters to each other, and these she had sealed inside a wooden box, along with a good bottle of Bordeaux wine. At the end of the ceremony, the Newlyweds were presented with this gift and instructed to open the box, along with the letters (and wine) on their fifth wedding anniversary, which of course, is Wood.

The Groom then kissed his Bride, and I played them out…

Just before the cocktails I had the pleasure of meeting Carey Hawkins, a talented and dedicated Hair and Make Up Artist, and a name I was very familiar with, who was kind enough to come over and introduce herself. It is always a pleasure to meet fellow wedding suppliers and put faces to those names we all see so regularly on Facebook and the Wedding Directories, but don’t always get to meet. Carey was doing a sterling job touching up Sarah’s make-up in the late August heat, and diligently helping with her train. It was very nice to meet her – quite often as wedding suppliers we don’t get much opportunity to say ‘Hi’ to each other – while everyone else is having the best time, we are working our socks off, looking chilled and professional of course, but hard at it none-the-less!

When my hour-long set was over, I went to say Congratulations to the Happy Couple. Weirdly, this is very often the first time I get to speak with the Bride in person (usually our correspondence is via e-mail up until The Day) but Sarah looked so beautiful I just had to compliment her on her dress (the groomsmen and bridesmaids also looked fabulous in tones of cream, fawn and champagne). They were both incredibly charming with their gentle West Midlands lilts, and they even told me they had a dream of moving to France for themselves in the future.

I wish them all the luck in the world, and hope to maybe see them here one day, living out their own French Dream!

When, in our discussions leading up to The Day, I had suggested a couple of pieces that they really liked, and then Sarah told me ‘I love musicals!’ I knew I was going to be able to produce a soundtrack to their wedding which would hit the spot… Here is what I played for them…

My Heart Will Go On – from the Film ‘Titanic’

Moon River – from the Film ‘Breakfast at Tiffany’s’

Edelweiss – from the Film Musical ‘The Sound of Music’

Entrance of The Bridesmaids, The Bride and Her Father

River Flows in You – from the ‘Twilight Saga’ film series

Rule The World – Take That

Theme from ‘ Ladies in Lavender’

I’m Kissing You – Des’ree from ‘Romeo and Juliet’

I Dreamed a Dream – from ‘Les Miserables’

If I Ain’t Got You – Alicia Keys

My Favourite Things – from ‘The Sound of Music’

All Of Me – John Legend

To Make You Feel My Love – Bob Dylan

Just The Way You Are – Bruno Mars

For more information on how I can create the perfect playlist for your wedding, please don’t hesitate to contact me.

This site uses Akismet to reduce spam. Learn how your comment data is processed.