Samantha’s first public performance was at the age of 5, playing descant recorder in the school Nativity play.  She took up the ‘cello aged 8, studying with Kitty Peacock – tutor of BBC ‘Young Musician of the Year’ string winner Caroline Dale and ‘Brodsky Quartet’ member Jacqueline Thomas. By the age of 14 she was awarded second place in the ‘Young Musician of Teesside’ competition, passing her Grade 8 examination one year later aged 15. She has played with the Cleveland Youth Orchestra at the Edinburgh Festival and the School Proms, on tours of Paris and Austria, and competed in numerous music festivals throughout the North of England.

Samantha is a highly accomplished composer and arranger, having written and produced music for an animated student film, and has composed and arranged several works for full orchestra. She was Musical Director of fourteen piece Soul band ‘Souled Out’ based in Cheshire, arranging all the music for five piece ‘horn section.’ For her solo work she currently arranges, records and produces her own backing tracks, multi-tracking her own performances to produce a ‘cello ensemble to rival the sound of any string quartet. Her arrangements are available to buy as sheet music from http://www.sheetmusicplus.com and she currently offers an arranging service for both public domain and copyrighted works.

In her teens, Samantha was successively Principal ‘cellist of Teesside School’s Orchestra and Cleveland Youth Orchestra, and was regularly invited to play in one-off events such as New Year’s Day Concerts and Eisteddfod Festivals. In her 20’s Samantha was an invited member of the highly acclaimed Stockport Symphony Orchestra, where she became co-principal ‘cellist, playing a challenging repertoire with professional soloists and conductors. She regularly played in chamber groups and string quartets at weddings, charity and private functions and for opera and choral societies throughout the North-West of England until relocating to France – to run a smallholding – in 2005. 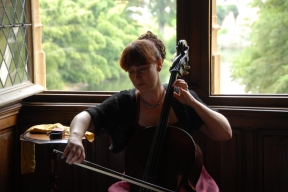 In 2017 she was invited to be guest principal ‘cellist in the Dordogne Variations production of Handel’s Messiah, and she currently plays in Trio ‘Carossa’ – a newly formed classical trio of oboe, violin/viola & ‘cello. She regularly performs in chamber music groups with other local professional musicians and has recently appeared with several Dordogne-based choral groups.

In 2014, Samantha was approached to form a string quartet to play for International clients at a wedding in a prestigious Michelin-starred Chateau in the Limousin. Unable to find enough interested string players, she took on the engagement herself, and was so well-received she decided to turn professional as Samantha Bramley – Cello Girl (now Samantha Bramley – ‘Cellista). In 2016 she launched Wedding Ceremony Music in France (weddingmusicfrance.com) which continues to grow, and has an excellent reputation amongst local wedding professionals.

As a solo performer Samantha plays using professional and originally produced backing tracks, bringing the sound of a string quartet – and more – to your event with just one musician!  Her versatile and varied style has something to suit all tastes, and she is constantly expanding and evolving her repertoire. As an accomplished arranger, Samantha is always happy to add your favourite song to her playlist. Her arrangements vary from piano or strings to backing band, Big Band or full Symphony Orchestra.

Samantha was Musical Director and backing vocalist for Cheshire based Soul Band ‘Souled Out’ before moving to France in 2005, and in 2008 joined well-regarded local Folk-Rock and Irish group ‘Le Craic’, initially playing ‘cello. She took up the violin in 2010 in order to complement the group’s Irish influences and now contributes electric ‘cello and violin, recorder and backing vocals. The band regularly gigs around the Charente area, including appearing at Kennedy’s Bar in Angouleme for St. Patrick’s Night 2016 & 2017.

Your Guide to the Perfect Winter Wedding Music